What is a Pod?

Pods are the smallest deployable units of computing that you can create and manage in Kubernetes.

A Pod (as in a pod of whales or pea pod) is a group of one or more containers, with shared storage and network resources, and a specification for how to run the containers. A Pod’s contents are always co-located and co-scheduled, and run in a shared context. A Pod models an application-specific “logical host”: it contains one or more application containers which are relatively tightly coupled. In non-cloud contexts, applications executed on the same physical or virtual machine are analogous to cloud applications executed on the same logical host.

As well as application containers, a Pod can contain init containers that run during Pod startup.

To create the Pod shown above, run the following command:

Pods are generally not created directly and are created using workload resources.

Container inside a pod

Pods in a Kubernetes cluster are used in two main ways:

Note: Grouping multiple co-located and co-managed containers in a single Pod is a relatively advanced use case. You should use this pattern only in specific instances in which your containers are tightly coupled.

For Example multiple container in a pods

Each Pod is meant to run a single instance of a given application. If you want to scale your application horizontally (to provide more overall resources by running more instances), you should use multiple Pods, one for each instance. In Kubernetes, this is typically referred to as replication. Replicated Pods are usually created and managed as a group by a workload resource and its controller.

Pods are designed to support multiple cooperating processes (as containers) that form a cohesive unit of service. The containers in a Pod are automatically co-located and co-scheduled on the same physical or virtual machine in the cluster. The containers can share resources and dependencies, communicate with one another, and coordinate when and how they are terminated.

For example, you might have a container that acts as a web server for files in a shared volume, and a separate “sidecar” container that updates those files from a remote source, as in the following diagram: 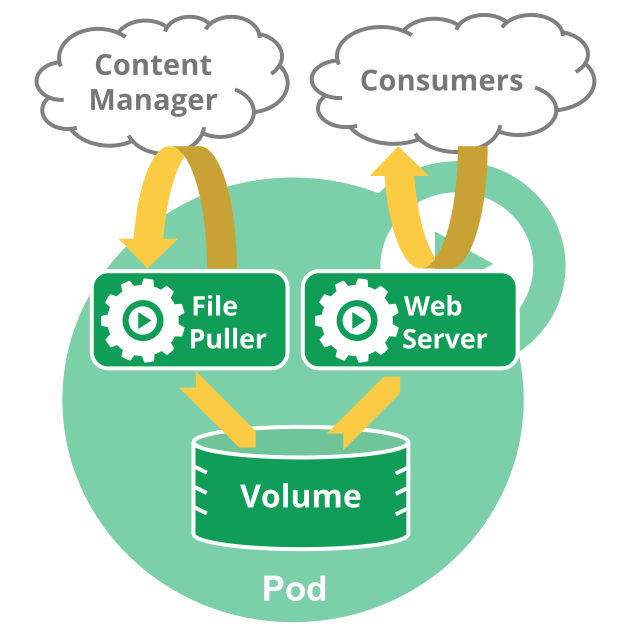