What is Docker Machine?

Docker Machine is a tool that lets you install Docker Engine on virtual hosts, and manage the hosts with docker-machine commands. You can use Machine to create Docker hosts on your local Mac or Windows box, on your company network, in your data center, or on cloud providers like AWS or Digital Ocean.

You can use Docker Machine to:

Using docker-machine commands, you can start, inspect, stop, and restart a managed host, upgrade the Docker client and daemon, and configure a Docker client to talk to your host.

Point the Machine CLI at a running, managed host, and you can run docker commands directly on that host. For example, run docker-machine env default to point to a host called default, follow on-screen instructions to complete env setup, and run docker ps, docker run hello-world, and so forth.

Why should I use it?

Machine is the best way to provision multiple remote Docker hosts on various flavors of Linux.

Docker Engine runs natively on Linux systems. If you have a Linux box as your primary system, and want to run docker commands, all you need to do is download and install Docker Engine. However, if you want an efficient way to provision multiple Docker hosts on a network, in the cloud or even locally, you need Docker Machine.

Whether your primary system is Mac, Windows, or Linux, you can install Docker Machine on it and use docker-machine commands to provision and manage large numbers of Docker hosts. It automatically creates hosts, installs Docker Engine on them, then configures the docker clients. Each managed host (“machine”) is the combination of a Docker host and a configured client.

What’s the difference between Docker Engine and Docker Machine?

When people say “Docker” they typically mean Docker Engine, the client-server application made up of the Docker daemon, a REST API that specifies interfaces for interacting with the daemon, and a command line interface (CLI) client that talks to the daemon (through the REST API wrapper). Docker Engine accepts docker commands from the CLI, such as docker run <image>, docker ps to list running containers, docker images to list images, and so on. 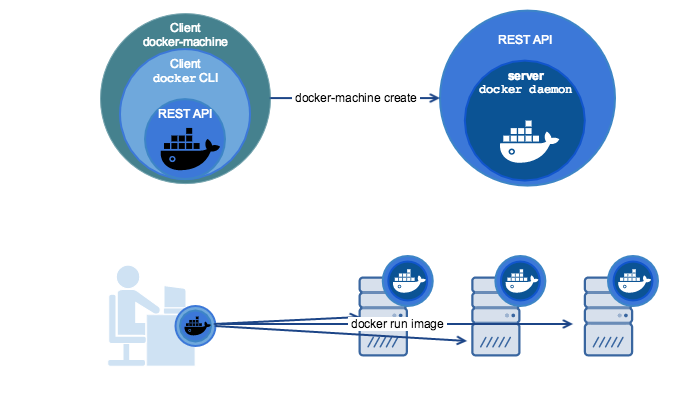